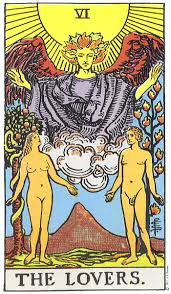 Well, this looks a lot more promising for lovers than yesterday’s draw (Two of Cups, reversed). In fact, could we get more literal? Where the Two of Cups represents a mutual attraction and connection, The Lovers speaks of a relationship where there is a deep, spiritual connection. We’re talking the full chakric scale here.

With the week that’s in it, of course I’m focused on romantic relationships between two people, but with the Lovers that doesn’t necessarily need to be the case. We could be talking about any deep, significant relationship.

The phrase “Know Thyself” is heard and seen so often it nearly trivializes the important part it plays in one’s coming to awareness. Pretty much anyone on any kind of a spiritual path is striving to understand themselves – who they are, what they believe, what their principles and values really are as opposed to what we are told they should be.

The Hierophant, which comes directly before The Lovers, is all about being indoctrinated into society by such shared experiences as education and religion. This is where the rule book gets handed down. With the Lovers, we put down the rule book and start to look within ourselves for answers instead of having them handed to us, unquestioned. For the most part, we don’t quite “throw out the rule book” as much as we might think, but we do start to determine which ones serve us, which ones don’t, and which ones were designed to serve others by instructing us to behave a certain, convenient, conformist way. Then of course we have to deprogram ourselves, but that sounds like a conversation for another day.

As part of this self-awareness, we come to acknowledge and respect our feelings in a much more significant way than when the Hierophant was in charge. This, in turn, has a profound impact on how we relate to others. We become more aware of who we want to spend time with and who we don’t. Not how people make us feel, but how we feel when we are around certain people, how we resonate with them.

Naturally, the person or people you feel really good around are the ones to which you feel the most connected. And through those relationships you come to practice and examine your beliefs and values even more, as do the people who feel connected to you. You might even say it’s an inter-relational ascension system. And  whad’ya know? On the card in the RWS deck, the masculine figure is looking to the feminine figure who is looking to an archangel, all connected in love.