Lay Down Your Swords 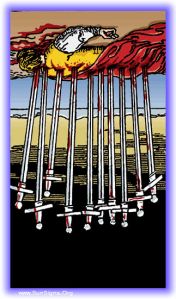 The Ten of Swords strikes me as primarily a card of drama and victimization. Yes, bad things do happen. Yes, there is tragedy on personal and global levels, and this card might show up in a reading about those things. On the other hand, this card doesn’t say “things couldn’t be any worse”, so much as it says, “Things are worse than they could possibly be. Imagine how bad it could be. It’s worse. “  If the character on this card was passive aggressive, they might be saying, “You carry on about your business. Don’t mind me. I’ll just lie here bleeding to death. Maybe someone will stick a few more swords in my back. It’s OK.”

Of course, this person is in pain, and I am empathetic. But at the same time, this person seems to be drawing even more pain to themselves and doing their best to ensure everyone knows how badly they’ve been victimized, what a martyr they are. Really, one sword would have done the job. Two or three is an unusually unfortunate streak. Ten is just taking the piss.

Like I said, this person is in pain, but they need to be healed and not enabled. Sympathy and concern are all well and good, but healing is not going to begin until you let go of the damned swords!

And this, I think, is where the card gets reversed. It’s time to let go, to rise above (literally, on the RWS card) and let those swords fall out of your back. Yes, those wounds are real and they still hurt, but until you remove those swords from them, those wounds cannot begin to heal. If you kept sticking a needle in your finger, would you expect to stop bleeding before you stopped pricking? You would not. It’s no different with emotional or mental wounds. You have to find a way to remove or stop focussing on the cause of the pain and start focusing on something else.

We create our own reality, and that reality is quite often the result of our perception of reality—this can create a vicious cycle when things go pear shaped. That is, if you see yourself as a victim, you tend to be a victim more often than someone who sees themselves as strong and resilient, because that is your reality. This is a psychological fact even without multiplying it by the law of attraction.

If you find yourself face down counting up the swords in your own back, instead of bemoaning your fate, realize that if you want a different result you have to create a different pattern and act accordingly.