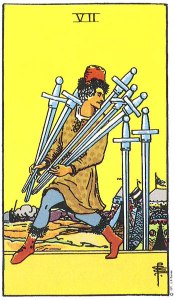 The Seven of Swords is a card about taking control of your life, going your own way, keeping your own council and following your own ideas. As is so often the case, whether that shows itself as a good, bad thing or just a thing depends on context, interpretation, and implementation. For example, yes, there might be foul play or deception involved, and you might be the deceiver or the deceived.

Despite casting that shadow, I feel the Seven of Swords sometimes gets a bad rep it doesn’t necessarily deserve. What jumps out at me this morning about this card is the question, “What is the impetus behind someone going lone wolf?”

There is a great temptation to slink off and take care of business on your own if you don’t want anyone to see what you’re doing.  Maybe you don’t want people to see your perceived ineptitude while you’re learning a new skill. Maybe you’re fed up with trying to fit in and are giving it up as a bad job. Maybe you don’t want to be slowed down by people who you see as distractions or liabilities, especially if those people are always “right” (according to their own divine wisdom). Even if people mean well, you might be getting the kind of support that sounds more like criticism. Of course, maybe you just don’t like criticism. Maybe you already know everything, but then why are you hiding?

Most of us need time for our internal processes to function well, some more than others. Writing, for example, is not a group activity (muses notwithstanding). Nor is meditation, or quietly untangling the layers of overwhelm an HSP can feel when we’ve had too much of other people’s company.

You might be going lone wolf out of a sense of self-preservation.  If you’re working in the fringe areas outside of what is acceptable according to common gossip, then you shouldn’t feel obliged to divulge things you are not ready to live with publicly.  Those people have plenty of material to work with without adding you to the mix.

On the other hand, you might be so used to being on your own, in your own internal world, that you are afraid to share that world with anyone lest they laugh, shake their heads and/or lock you away. That can be a lonely place to be if you are there not by choice but because you are afraid you cannot venture outside of the boundaries of that internal world. If that is the case, I suggest you take some time from looking at cats in Halloween costumes (or whatever) and point your Google machine in the direction of people who share your interests with whom you can communicate. It’s OK to retain a degree of anonymity (e.g. no photo, address or last name) until you are ready to venture further. And don’t do yourself down if the people you find already seem to know everything. They don’t. They may know a great many things but nobody knows everything. Approach them with authenticity, openness and respect and they will reciprocate. If they do not, they are probably posers.

Of course you might be going lone wolf due to a lack of personal integrity. In that case, get over yourself.

So the question becomes, “Is lone wolf style serving you, or are you using it as a method of avoidance or deception?”  I’ll leave that for you to answer.

2 thoughts on “The Daily Draw: Seven of Swords”