On Letting Go and Embracing the Unknown 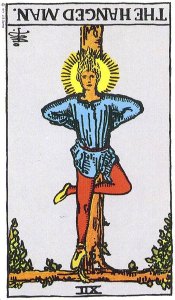 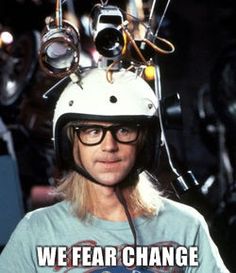 The hanged man represents the energy, the power, the gift of being able to let go, sacrifice, embrace the unknown in the faith it will take you where you are supposed to go. Reversed, it is encouraging me to ruminate on what happens when you try to avoid letting go.

Somewhere in the sea of memes that flow down my various walls daily, I saw one which read something like “Living the same year over and over 75 times isn’t a life.”  Change is inevitable, but that doesn’t mean it can’t be blocked, diminished, or deviated from to the best of one’s ability. So many people do their best to fight it that they get stuck in a rut for the better part of their adult lives, giving in only to death, taxes and any other inexorable forces out of their control.

Why does this happen? Well, to quote the words of Garth (Wayne’s World) “We fear change.” Yeah, that pretty much sums it up for a lot of people. Let’s face it—change is a bit of a crap shoot. Sometimes change feels good, sometimes it can be the realization of a dream, sometimes things get worse before they get better, sometimes change can be devastating and you may struggle for years to recover from it.

One thing all those possible outcomes have in common is that they are a step into the unknown. Few things can take you out of your comfort zone more effectively than going where you have not been and not knowing what will happen next. Nevermind that this is where a lot of personal development occurs. That is not the point of this conversation.

The point is that many, many people like what they know, and are comfortable with that familiarity. It may not be perfect, it may not always be pleasant but they know how to navigate it, they know what reaction they will get for each and every action they take, there will be no unpleasant surprises. In fact, there will be no surprises. We shall go from here to eternity on an even keel. It could be worse.

Except, no matter how you try to cling to the things that make up your comfortable, familiar world, life has a way of taking them away from you whether you. Children grow up. Parents cross over. Friends move away. TV shows get cancelled. Your local gets converted to a fern bar. And all the while you try to hold on to whatever is left, without letting in anything new, until eventually you got nuthin’.

OK, I realize that is an extreme logical progression from my starting point, and if you’re reading this you probably don’t fall into the category of clingers I’m talking about. But as healers we have to acknowledge that there is a lot of that kind of stagnant energy going around, much of which is fear based. Just look at the amount of entrenchment concerning people’s political views despite the fact many of them don’t make a lick of sense. It’s not about making sense. It’s about returning to a time and place where the person felt safe and comfortable, or at least safer and more comfortable.  Of course, this is an illusion but a lot of politicians make it work for them.

Change is going to come regardless of whether you want it. It is part of this thing we call a life path, which everyone is on whether one knows it, one believes it, or not. The leaf let’s go of the tree and flows down the river gracefully. The sticks in the dam are pummelled by water until they become disengaged from each other, then flow down the river. It is a natural progression from this card to the next, the Death Card, where things that no longer serve our life purpose are swept away regardless of whether we choose for them to be.

Letting go is an ability that allows us to process change and flow with it in a way that causes a minimum of pain. There is a feeling of peace that comes from letting go, from giving in to the flow of life and where that will take you. We sacrifice the comfortable for the unknown in the belief that the journey will take us where we are supposed to go. We know that if we delay the journey beyond its starting time we may somehow diminish it or miss something important.

In healing work we understand that, and probably take that understanding for granted. But a lot of people, some of them clients, don’t have this understanding, or don’t want to look at it. It’s part of our job to help them transit change peacefully, and to see that surrendering to the energy represented by the hanged man is the difference between being ready for the changes indicated by the Death card and railing against them in futility.