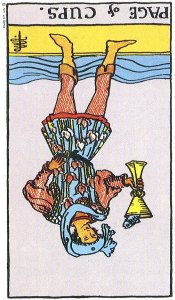 I’ll let you in on a secret – sometimes in these blog posts, not even I know what I’m on about until I read it myself. Now that I’ve written this one, I can see I’m mostly speaking to those of you who feel, blocked, frustrated or otherwise diminished in your intuitive abilities. For me, reversed cards often show up as blockages in that cards energy. Foremost in my mind today are the aspects of the Page of Cups that have to do with intuition and emotional intelligence.

In college I had an English professor who would, on occasion, speak in such a way that his words are still with me nearly 40 years later. For example, one day upon reviewing my creative writing assignment, he said to me, “There’s nothing wrong with writing about the truth, but in order to do it you have to lie like a bastard.” I nodded, but it was years before I really began to understand what he was talking about. For starters, truth is a lot more subjective than most people realize – a lot of it depends on perspective and point of view. Then there is the fact that something that might illicit an emotional response from you might illicit a yawn from someone else, which is one reason a writer might try to impart an underlying truth or an emotional truth about a situation or event by, shall we say, liberally dramatizing that situation or event beyond the actual “facts”. For example, when a filmmaker tries to express what a legendary historical figure Abraham Lincoln was by portraying him as a fearless vampire hunter. OK, that might not be the best example. In most cases the tweaking is a little more subtle, but the point is to get the “truth” across without getting bogged down in relatively insignificant details.

To put it another way, “Writers write”, which is Stephen King’s description of what makes someone a writer.

What on earth does all this have to do with an upside down fish in a cup?

If you grew up in the latter half of the twentieth century like I did, chances are you grew up in an environment where the priority placed on emotional intelligence came in a distant also ran to academic intelligence, financial stability or being “normal”.  How do you know you’re intuitive? For starters, you go through all that conditioning and you’re still interested in intuition.

At the risk of sounding trite, anyone can practice intuition. Don’t believe me? Can you listen? Can you use your imagination? Can you be honest with yourself about how you feel and what you feel? Can you distinguish between what pops into your head unbidden and what gets there by following your train of thought? Hint: your own thoughts usually take the train.

I’m not asking whether you do these things now, I’m asking whether you can do them.  When you break it down, it sounds more like a manageable process than something that comes out of a magic Kinder egg given to only a few. And of course some people are given some wonderful Kinder eggs,  but the rest of us quite capable of going to the shop and getting our own Kinder egg of some description (to push that analogy to breaking point)

I’m not going go on about process. There are plenty of resources for that. Of course, none of them will work for you unless you take on the doing the work.  If it helps, treat it like a college course – take notes, do homework, attend lectures.

Observe and write down your experiences. Evaluate, but do not judge. Where others are in their development is unimportant. Take a cue from the young person on the card and play with the energy. Be patient and persistent, but don’t turn it into hard work.

In short, approach developing your intuition as you would any other skill you would like to acquire.

Now go and do.