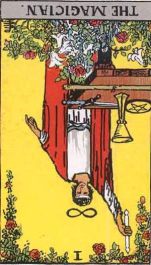 Not surprisingly, being towards the beginning of the Major Arcana, the magician represents basic abilities. In the RWS deck, the table in front contains his working tools, which are the four elements – earth, air, fire and water.  The magician has the capability to use these tools do anything that can be imagined, capability being the key word in that phrase. With one hand raised towards the sky and the other pointing downwards, the magician draws energy from source and grounds it to mother earth, ready for action, but not yet applying that energy to anything.

All of us have the ability to draw on the Magician, to use that power to create, build and manifest our dreams and desires.  And all of us have the ability to tell ourselves that we do not possess this innate personal power. That brings us to the reversed aspect of this card. While it can indicate misuse of this power, today I feel it has more to do with blocking or not being able to fully access the energy of the magician.

Why does it seem so much easier to invalidate one’s abilities rather than affirm them? Not everyone will agree with the assumption that the former is easier than the latter, and I’m glad because that shows progress. But it’s true enough for too many people. Well, bollo…enough of that nonsense! Hibernate and see what happens. You’ll be famished by the end of the week. In a month or two the heat will probably be disconnected for non-payment. You’ll never make it to the equinox if you don’t get up out of your bed (literally and figuratively) and get moving.

Since we can all agree that surviving the winter would be a good thing, and that we have, in the past, proven ourselves capable of channelling enough energy to survive these cold dark months, why limit yourself to merely surviving? What’s wrong with thriving, hmmm? Will that require some changes? Probably. Will that be easy? Probably not. Are you capable of using the abilities of the Magician to thrive? Of course you are! Do you believe that?

You’ll have to answer that last question for yourself. But remember, just because you don’t believe something, doesn’t mean it’s not true. I couldn’t believe there was somebody in the music business who’d never heard of Paul McCartney until Kanye West came along. I digress, but I hope you see my point.

Know that you can access and use the basic abilities represented by the magician. Reaffirm that knowledge until you have an indisputable belief in it. Focus on where you are going and don’t let yourself be distracted by any negative feedback you might be getting in your immediate environment. You know that idea that’s been running through your mind, the oneyou haven’t quite got around to acting on? Start now. Maybe it’s that non-smoking/exercise/weight loss/etc. plan you’ve been starting “next week” since the new year started. Maybe it’s time to sign up for one of those adult ed. classes there seem to be so many of this time of year. Maybe it’s none of those things, but you do have something in mind at this very moment. Find a way to tap into the energy of the magician, then choose what are you going to do with that energy this week, today, right now?