Is This Battle Necessary? 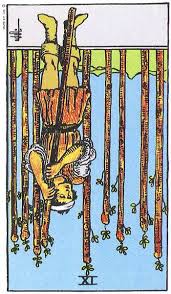 The Nine of Wands has been through some tough times and they’re not over yet, as illustrated on the card in the RWS deck. This person is banged up and bruised but ever vigilant, expecting trouble and, staff in hand, prepared for another fight.

The Nine of Wands is a card of self-defence and it’s a card of defensiveness, two sides of the same coin really. A person who expects to be attacked often becomes defensive, and the expectation of being attacked comes from a pattern of being attacked previously. On the other hand, a defensive nature can be a magnet for attracting situations in which you need to defend yourself—people who seem to be spoiling for a fight are often more likely to find themselves in one. And before long you have your classic “chicken or egg” perpetual cycle.

As with any cycle, the only way to really break it is to get off the roundabout. Slam on the breaks, stop, go someplace different, drive away from the drama. Yes, I know, that’s easier said than done. Some battles will fall apart like a house of cards when you stop giving them your energy, and others will persist because it’s not necessarily all about you, or if it is, it’s something you need to work on as part of your life path, or maybe you just did something stupid and now you’re paying for it. You’ll have to work that one out for yourself .

I personally have finally realized that not letting people push me around just to keep the peace (which never comes as a result) is probably one of the big things I’m here to work on. And, oh yes, I have felt the energy of the nine of wands. But being defensive has not served me well in the past.  It just seems to create more drama.

Here is what I’m thinking today. The Nine of Wands is reversed. Maybe it’s time to try something different, put down the staff, take a different stance, tell your solar plexus it doesn’t need to go through life at DEFCON 2.  Sure, you have the stamina and perseverance to keep on fighting, but is it worth it?

What if I told you that altering your perception of what’s going on around you can alter your perceived need to be defensive.   Let me tell you a about a real-life Nine of Wands experience…

I’m from America but I’ve been living in Ireland over a quarter century.  I don’t get back much. So when I do there tends to be a bit of culture shock. I think it was six or seven years before I made my first trip back (in the late 90s). It was a business trip that involved travelling to Texas. Being from New England, it was familiar yet foreign to me already.

The first morning I went for breakfast in the small dining area of the hotel (it wasn’t the Hyatt). The news was on. I’d spent the last half dozen years or so watching RTE and BBC news (pre-Sky), low key, rational tones, considered opinions (at least relatively speaking) but when I sat down in front of this newscast in Texas I was suddenly bombarded with an urgent talking head loudly proclaiming  “YOU ARE IN DANGER FROM EVERYTHING AND ANYTHING BLACK PEOPLE WHITE PEOPLE RICH PEOPLE POOR PEOPLE THE ENEMY’S GOVERNMENT YOUR GOVERNENT GREENPEACE GREEN PEAS THE WATER THE AIR YOUR CAR CHRISTMAS BLAH BLAH BLAH” screaming while and a banner streamed alternative things to fear at the bottom of the screen.  Whether intentional or not, the effect was to pump massive amounts of fear into the viewing public. Is it any wonder why so many people are shooting each other when they are getting pumped full of fear for breakfast.

So, do you think the people watching this newscast would be more Nine of Wands or less Nine of Wands than the people who had music with their breakfast? And yet, both groups of people lived in the same America. The crime rate was not higher for one group than the other regardless of whether they were on guard and stressed out or chilled out.

Sometimes you truly need to defend yourself. But sometimes you just need to let go, unplug. Ask yourself whether you need to get involved with this battle. Maybe this is somebody else’s story and you don’t need to be emotionally involved. Maybe it’s your story and it’s no longer a good enough story to defend. Maybe it’s time to let it go.

One thought on “The Daily Draw: Nine of Wands, reversed”