Do You Need This Conflict? 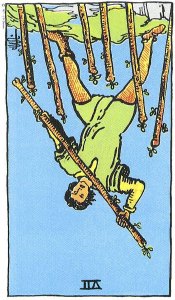 When you see the Seven of Wands it’s a good sign that there is some conflict in play. One aspect of this card is to caution that for every action there is an equal and opposite reaction—you push, you get pushed back. That doesn’t mean give up. It means be prepared.

Some things are worth fighting for and other things, not so much. Only you can decide which is which, and how important it is to you to pursue you goal despite the conflict. With this card reversed, there’s a chance that the fight might be more trouble than it’s worth.

On the other hand, and depending on the context, this card could be suggesting that you’re not standing up in the way you should. Is there something that’s been bothering you, but for one reason or another you’ve done nothing about it? Maybe you feel powerless or maybe you are too focused on the daily routine, maybe even as a means of escape. The Seven of Wands suggests that you do have it within you to make a change if you make an effort.

Then again, depending on the context, maybe you just like conflict. Have you been arguing for argument’s sake? Have you been right fighting about every detail no matter how insignificant? The Seven of Wands reversed can indicate that it might be time to take it down a notch. Not every battle needs to be won or even fought. It might be time to agree to disagree, maybe even if that is a tacit arrangement. Excessive conflict can have a direct impact on your happiness and inner peace. It might be time to decide which is more important and act accordingly.