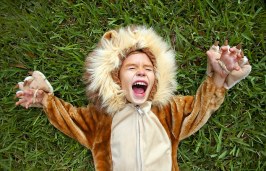 I was bathing my five year old son over the weekend when he suddenly grabbed his leg with one hand and foot with the other, crying out that he had a cramp. I reacted immediately to do what I could to ease his pain, which in this case involved a combination of massage and Reiki. After a minute of this treatment the following conversation took place:

That question was blurted out without a care as to whether he was right or wrong about his self-diagnosis. After a brief consultation, it became clear that the condition he mistook for a cramp was, in fact, the wrinkling of skin one gets when one has been in the bath for a while. And we both laughed.

We were all young and spontaneous once. I remember calling my parents into my room one night to tell them solemnly never to go up in a hot air balloon, because they would go up in the air and die. I think it had something to do with their being no air. To their credit, they listened attentively and assured me they would take my advice. It was some time later before I appreciated that, even if I had been right, it was probably never going to be an issue. At the time it was just something important I had to do right now.

As children we have an amazing capacity for using our own creativity to describe and interact with the world as we perceive it. Quite often, we’re not too concerned about whether we’re right or wrong. The important thing is that our ideas make sense to us. Besides, adults can be counted on to point out the flaws in our thinking. Growing up, we have ample opportunity to be told we’re wrong.

Maybe that’s why we get so addicted to being right. By the time we reach adolescence we become very concerned with how we look to our peers and the elders we respect, we want to fit in, to not make fools of ourselves and society is quite happy to reflect the correctness of our conformity back to us. Emphasis is placed on having the right answers. Don’t speak unless you know what you’re talking about. Our ideas might be devalued unless they make sense to society, regardless of what we think ourselves.

A college professor of mine once told our class, “One should never be afraid of sounding ignorant…one should be afraid of remaining that way.” Even though he was probably speaking academically, I’ve taken it as an admonition to not remain ignorant about who I am, not just what things I know. What is my nature? What is my spirit? What is my calling? These are all important questions with no right answers except, of course, for the ones that come from inside you. And when you find those answers they may or may not make sense or conform to the microcosm of society in your corner of the world. And that can be kind of scary.

I’ve had that college professor’s words stuck in my head for close to 40 years now, and in that time I’ve thought about the courage it takes to put that into action – the courage to be completely wrong. Wrong in how you sound to the people around you, and not letting that sway your thoughts and feelings. Wrong about what may not work for you on your path of self-discovery, then letting it go and moving on to something different. Wrong about what you thought and believed yesterday that doesn’t mesh with your understanding today, and not feel obliged to be consistent by remaining in the past.

In other words, it takes the courage of a child.