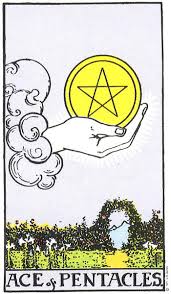 Aces are often indicators of something new coming into your life, perhaps a chance to begin a new phase. With the Ace of Pentacles this new beginning is rooted in the material plane, since pentacle energy resonates with the practical aspects of life. That can mean a chance to be prosperous in a business venture, for example, but pentacles are about more than cash flow (even if it is the first thing people usually think of).

The Ace of Pentacles can just as easily indicate potential results in areas such as health, home improvements, or construction projects. It could even indicate a connectedness or grounding to mother earth in a new and deeper way than before. It can represent any tangible goal in the physical world.

The thing to be aware of here is that you are being given an opportunity to manifest your desires. You are not being handed the end result. So I don’t recommend sitting on the sofa waiting for your lottery numbers to come up. It’s not about that.

When the universe is trying to give you something, the only way you are going to get it is by taking an active role in receiving it. That’s how you let the universe know that you actually want it. In other words, you still need to work at whatever it is you want to achieve, whether it be in your business, in your garden or in the gym. The reason that the phrase “one percent inspiration, 99 percent perspiration” is so often used is because it is so often true.

What you can count on with the Ace of Pentacles is that there is now fertile ground and the right environment to achieve those goals. This is the right time to get started and take action You’re going with the current – the energy is flowing in a direction that will benefit you provided you put in the effort.