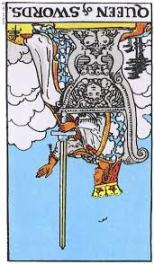 The Queen of swords is experienced, intelligent, and quite formidable. When this card is reversed, I see a person who always has something to say about any given situation and isn’t afraid to say it – a right fighter.. With this man or woman is the last word is theirs whenever possible. There can be humor in the remarks, but it can be cutting and at the expense of others, maybe even those she’s speaking to. Contradict this queen at your own peril.

This person demands the truth from others, but might be conservative about revealing her own, or at least leave parts out which can result in deception by omission, with the bonus of plausible deniability when others make invalid assumptions based on what they think they were told. “I never said that”, this queen might say, and she would be right (of course).

This person is intelligent, but can be given to over-thinking things to the point of their own detriment. The brain is always working overtime and has a tendency to come to the worst possible conclusions in a given scenario. The emphasis is on pessimism.

The preceding makes this reversed queen sound harsh, but I would ask you to be compassionate towards her. Ultimately, if you look deep enough on someone who hurts others, it is likely that there is a foundation of personal pain. This person has suffered, not necessarily in a way that would inspire a Facebook meme out of, but significant enough to her. After all, what people feel is subjective, not objective, and not for someone else to judge. In truth, this queen probably does a good enough job of judging herself, and there’s a good chance she doesn’t like the result, not that she would say.

When someone internalizes negative thoughts and feelings over time, keeping them to themselves, it should be no surprise that they have a tendency towards depression. If you can get through the barbed wire, it’s love and understanding this person needs.