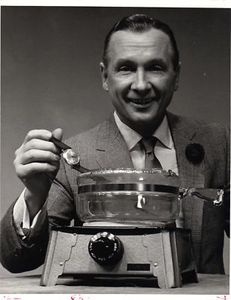 If you lived in the states in the early 60’s, you may remember a fellow named John Cameron Swayze advertising Timex watches on television, in much the same way that Barry Scott now advertises Cillit Bang, although perhaps less loudly and with a bit more of the gravitas you would expect from a news commentator. Anyway, the ads went something like this: A Timex watch would be strapped to the track of an army tank and sent 1,000 miles across jungle terrain, or it would be attached to the front of a snow plow that would proceed to clear the snow from half a large town, or it would be strapped to a small atomic bomb which would then be detonated over a test site in Nevada (I may be exaggerating some of these. It was a long time ago and I was a mere child). Inevitably, once it was safe to do so, John Cameron Swayze would remove the watch, check that it was still working (which it always was), look at the camera and say “Takes a licking and keeps on ticking”.

That pretty much sums up the energy of the Nine of Wands.

This is not a quitter’s card. It says “Try your best to stop me, I can take it”. There is strength, determination and resiliency but, oh, what a struggle. It’s all uphill but you’re mindset is to persevere as though there’s no other choice. And it could well be it seems that way. Maybe it’s pouring rain, but you still have to get the kids to and from school. Maybe your job is relentlessly soul destroying, but you need to get that payslip at the end of the month.

And that brings me to the “you against the world” aspect of this card. A continual focus on an ongoing, protracted struggle can result in a self-fulfilling prophecy, where life is always a struggle because it seems you are always struggling in life. Enough of that circular reinforcement and what may have started out as a rough patch becomes ingrained as “just the way it is”, which can take some effort to change.  If you’re feeling the energy of this card, try to take a step back for a more objective look. Is there something different you could be doing that would improve the situation, and maybe end or reduce the struggle?

Note: In researching this post, I’ve learned that Cillit Bang’s Barry Scott is not actually a real person, but a character played by actor Neil Burgess. I’m gobsmacked! :-O http://en.wikipedia.org/wiki/Cillit_Bang