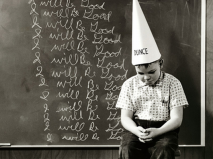 Saturday morning and my four-year old son is over excited. “I’m getting carried away,” he says, having heard me say it often enough. He’s jumping on the couch, dragging his little sister around the living room, tossing toys, being outside-loud and brash. No badness, just madness. And all the while we’re admonishing, pleading, reasoning (well, attempting) and just plain saying “no. no. no.” None of it had any effect. It was time for the naughty corner.

Despite the title, the naughty corner is for having a time out. A chance to diffuse a situation before it reaches boiling point, or at least a distraction that will break the anarchic tendencies that are being acted out at the time. The naughty corner is not primarily about punishment, although I’m sure our children have a different opinion, based on the wailing that can result from a few minutes of exile (one per year of age).

Children are working from primary colours whereas adults are usually more adept at shading, so naturally there are different perceptions. Both groups can have different opinions about what is acceptable behaviour, or why some behaviour is unacceptable. For example, trying to reason with a three-year old why it isn’t nice to take toys that other children are currently playing with, and that they would not like it if their toys were taken, and then patiently explaining the concept of sharing, once again, is a flawed concept starting with the phrase “trying to reason with a three-year old”. The child sees the toy. The child wants the toy. End of story.

However, that is not the end of the story for the adult. As loving parents, we owe it to our children to teach them right from wrong, acceptable behaviour from unacceptable, and that actions have consequences. And we can’t expect that they will always understand why. We are older, more experienced, wiser (we would hope) about such things.

And this got me thinking….

What if this 3D earth that we inhabit is, in part, a type of naughty corner? As adults, many of us exhibit antisocial or detrimental behaviour  – people argue, lie, manipulate, blame others for their actions, form bad or inappropriate relationships, smoke too much, drink too much, are too much. Not everyone, not always, and many are striving to resolve personal issues in an imperfect world. I would think those issues would need to be resolved completely before one could be trusted to play well together in an environment of love, trust, openness and rapid manifestation, if you catch my drift.

So we get sent to the naughty corner. Not as punishment, but as a teaching tool, another chance to internalize what we need to know before we can move onwards and upwards. We might not even understand why, but there is a reason. Eventually we’ll learn.

Just for today, I will not worry

Just for today, I will not be angry

Just for today, I will be grateful

Just for today, I will be kind to all living things

Just for today, I will do my work honestly

5 thoughts on “The Naughty Corner”